Up The St. Joe Again

I told Sean that I wanted to leave town between 8 & 9 AM. At 8:10 we were both loaded up and ready to go. After a quick stop at the grocery for road snacks and incidentals, we were on the road. Sean is new to fly fishing and had never been to the St. Joe before. There was a lot of conversation about how pretty the river and the surrounding terrain was. I've been there several times before but had never noticed a barn on the far side of an irrigation pond. It seemed fitting to get a photo, so I did. 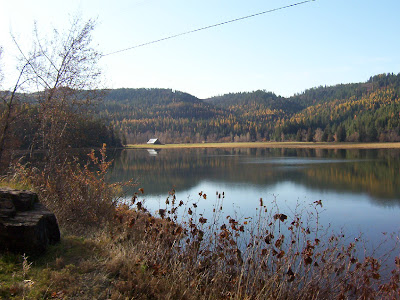 A few more miles up the river we came upon one of my favorite views. I took this photo last year but still like it. 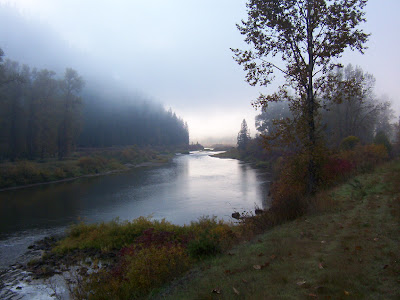 When we reached our destination, luckily there was nobody there. So we geared up and started working the water. Here's a shot of Sean trying to figure out the knots. 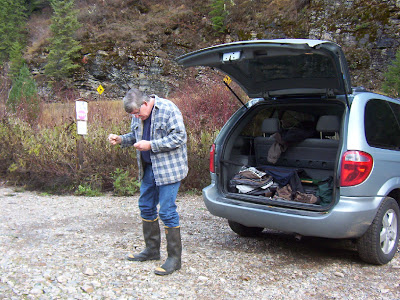 At river's edge, the pool I want us to fish looked perfect. There weren't any fish rising, but there wasn't last year either. Not until I started casting to the pool with a Royal Coachman did any fish start feeding. Then it turned into a frenzy, but that was last year. This year there was no action at all. We worked that spot for about an hour with no results. The wind was blowing so hard upstream that the fly always ended up above our lines. That way the fish would always see our lines before they could see the flies. So, we moved on. Just past a steep switchback and river overlook we stopped for lunch. 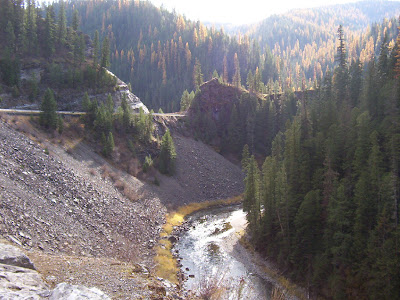 We found a place with some rocks acting like guard rails and one of them was just right to use as a table. Hence the name table rock. 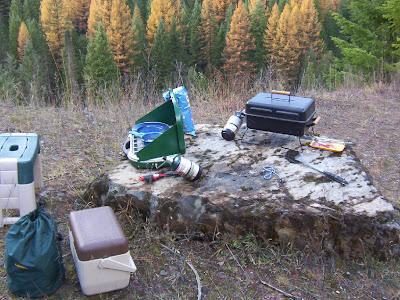 The scenery there was remarkable. It looked like the Tamaracks were on fire when the sun shone from behind heavy clouds. 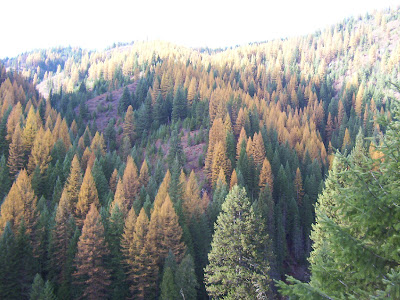 It was a perfect place to stop and enjoy brats on a bun with kraut and chips. 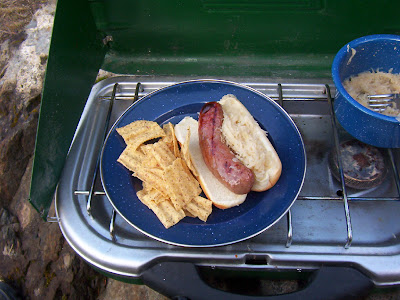 We stopped at one more place to fish that looked like it held fish. And again there was no action. Some locals stopped by and asked if we were having any luck. He explained that the fish in the St. Joe are migratory and have moved downstream. I told him about the great luck I'd had last year and he said that opposed to last year, the freak 10 degree cold snap we had a couple of weeks ago had moved the fish early this year. So that's my reasoning (excuse) for us getting skunked on this outing. It was a great day however and we both thoroughly enjoyed ourselves. We were close enough to the upper end of the river that we decided to continue upstream, over the hump to St. Regis Montana. Then I-90 back home to Liberty Lake, Wa. On the way over the hump we came across a reminder that whether you are ready or not, it's on it's way. Winter, ugh. 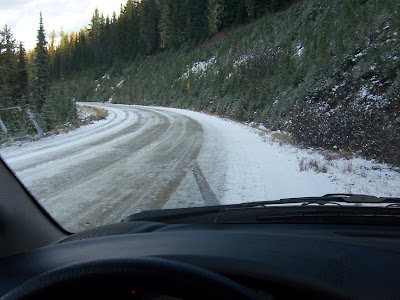 We are already making plans for next year and we really enjoyed the day. I hope you like the report and photos. Autumn is beautiful on the upper St. Joe.
Posted by Joe at 4:43 AM 1 comment: