They that wait on the Lord shall renew their strength. They will rise up with wings as eagles. They will run and not grow weary, they will walk and not faint.

Have faith in the Lord and in the end you will always triumph. God has more soldiers than Satan.
Posted by Joe at 4:20 PM No comments: 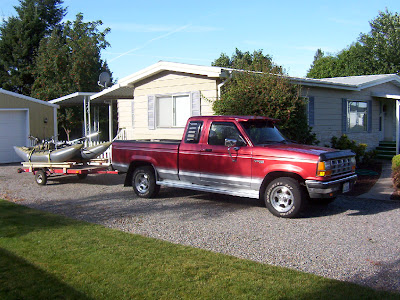 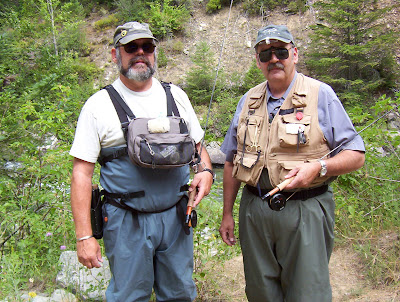 I hadn't been fishing in a while and felt like I needed to go. So, I called an old friend, Jeff, and we went to Fish Lake. The picture above is the set-up I use to do most of my fishing. Fish Lake is on the back road halfway between Spokane and Cheney, just past the little town of Marshall. The lake was like glass for most of the day with only occasional breezes. Until late afternoon, we were the only people on the lake except for three kayakers. We couldn't have picked a better day to go. Except that is for the fish. I caught two of the smallest Bluegills I've ever seen. Jeff had a better day catching three Tiger Trout. Tiger Trout are a cross between German Browns and Brook Trout. They are sterile as a result of being crossed, and were introduced to Fish Lake to rid it of the Bluegills. One of these days, I hope to figure that lake out so that the catching is at least as good as the fishing. It was a wonderful relaxing day!
Posted by Joe at 6:16 AM No comments: 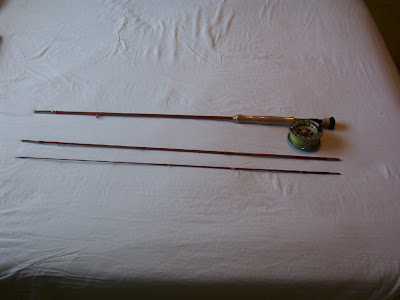 Well, it looks like I'm building another bamboo fly rod. I traded a collectible fly box for and old Heddon fly rod. It needs a new grip, reel seat and guides. I finished the grip and reel seat and before long I had to take it outside and test it. I found that with a Cortland 333 WF9F,I could get 60+ feet out of my casts. Looks like it's a salmon or steelhead rod. It's going to be fun.
Posted by Joe at 7:33 AM No comments:

Linda Quilts! Yes She Does 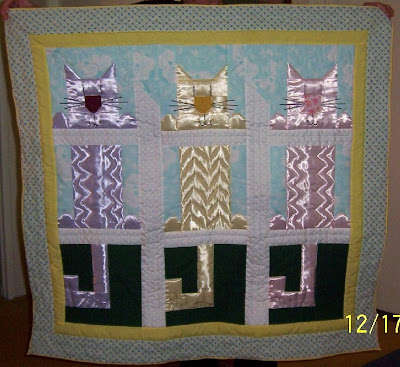 A few years ago, Linda saw a news item that showed children in an orphanage in Afghanistan that were using a light bulb to stay warm during cold weather. It inspired her to start a ministry at our church called "Comfort Quilts." She would make quilts, and organized others to do the same. They would then be blessed by our pastor, and shipped to Afghanistan for those orphans. Since then she has been making baby quilts for all the homes around Spokane that house battered and abused mothers and children. She has also made many quilts for friends and family. She makes me very proud. This is just one of her offerings. It's called, "Hangin' With The Kitties."
Posted by Joe at 7:38 PM No comments:

One of Linda's Flower Beds 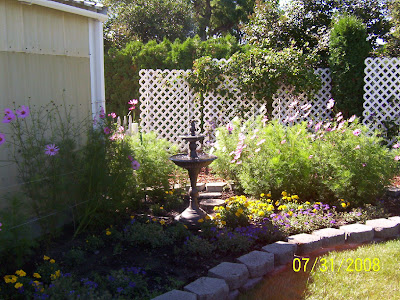 Linda has put many hours into our yard and it shows. This shot shows our fountain bird bath and some of her cosmos annuals. The bird bath attracts many different kinds of birds including wild canaries. They are a bright yellow with vivid black markings. And, they are a genuine pleasure to watch.
Posted by Joe at 8:06 PM No comments:

Recently I built a bamboo fly rod for our neighbor's 10 year old daughter. I wrote an article about the project and posted it on washingtonlakes.com . Here is a link to that article.
Posted by Joe at 4:08 PM No comments: These guys are three of my fishing partners. This was a day at Medical Lake, fly fishing for Rainbow Trout and German Browns. We all fish from pontoon boats like these.

Don't you know that you yourselves are God's temple and that God's Spirit lives in you? If anyone destroys God's temple, God will destroy him; for God's temple is sacred, and you are that temple.
This tells me that we need to be good to each other. Because if we've given our lives to Jesus, The Holy Spirit lives in us.
Posted by Joe at 5:11 PM No comments: Steve and I getting ready to ply our passion on the Lochsa River in north central Idaho. Linda and I took our vacation at the Three Rivers Resort in Lowell Idaho, Sept. 2007. Lowell is about 98 miles up the Clearwater River from Lewiston. It's where the Lochsa and Selway rivers come together to form the Clearwater. This is the front walk of our home in Liberty Lake. We put a lot of work into the yard, and it has become a very pleasant place to relax after all the work is done.
Posted by Joe at 8:13 PM No comments:

The Purpose of My Blog

I've created this blog to share some of the thoughts, ideas and ideals that are important to me and my family. It will include news and photos about our home, our work, our vacations and pleasures and our relationship with Jesus.
Posted by Joe at 7:34 PM 2 comments: